The two artists Prof. Heide and Prof. Makis Efthymios Warlamis founded the International Design Center I.DE.A in 1992 and the non-profit art museum Waldviertel in Schrems in 2009.

You can find more information at warlamis.at. 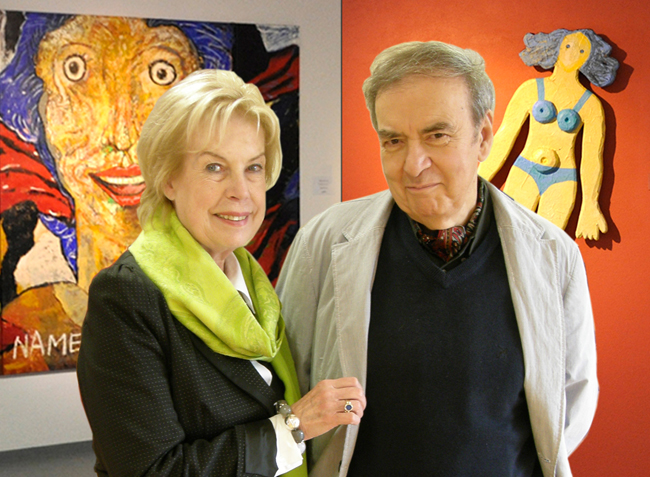 Born in Klagenfurt in 1942, is a sculptor, designer, manager and educator.

Her best-known works include the development, production, as well as worldwide presentation and marketing of the porcelain design program with the brand name ‘Vienna Collection’.

In addition, large sculptures, bronzes and installations in public and private buildings; Head of various galleries, including the Austrian Gallery for Ceramics, Vienna; Teaching activity; as well as worldwide exhibitions of her sculptural works.

Prof. Mag. Arch. Dr. hc, holder of the Austrian Cross of Honor for Science and Art and the Golden Decoration of Honor for services to the federal state of Lower Austria Warlamis was an architect, painter, designer, poet, writer, educator and museum founder.

Born in Northern Greece, he lived and worked in Austria for 50 years. He was married to the artist Mag. Art. Heide Warlamis (sculpture, ceramics, design).

These included Mikis Theodorakis and Friedensreich Hundertwasser, as well as Pope Benedict XVI. and the ecumenical patriarch Bartholomew I.

For Warlamis, art was a medium that permeates, shapes and renews all areas of life. The universal artist has always lived and worked for the community and used his art for communication and understanding, for dialogue between cultures and between generations. His work was characterized by deep spirituality.

A particular concern for him has always been the support of children and young people.

He was committed and committed to his native Greece and his adopted home Austria. In particular for Lower Austria, the Waldviertel and the city of Schrems, he has implemented countless projects.

The artist-architect taught at various European universities, initiated and directed the “World Ecological Academy of Santorini” in 1995 as part of the cooperation program of the European universities, MED Campus and in 1988 directed the master class for experimental architecture at the International Salzburg Summer Academy in cooperation with Friedensreich Hundertwasser. Together with his wife Heide Warlamis founded (1992) and headed the International Center for Art and Design I.DE.A., and in 2009 the Waldviertel Art Museum in Schrems, Lower Austria. Since 1982 he has realized major international personal exhibitions in museums and exhibition centers around the world in Europe, the USA, Asia and Egypt.

Warlamis began his work in the context of the radical Viennese architectural avant-garde of the 1970s with exhibitions, experimental art and architecture projects, as well as socio-cultural and urban research projects, and over the years he developed more and more into a “total art artist, a“ uomo universale ”who we long thought to be extinct. ”(Prof. Dr. Volker Fischer, art historian, German Architecture Museum and Museum of Applied Arts Frankfurt).

Through his close collaboration with Prof. Karl Schwanzer (former assistant to Josef Hofmann) and Prof. Norbert Schlesinger, Warlamis is one of the immediate successors of the tradition of the ‘Wiener Werkstätte’, which he revitalized and continued in his holistic way of working and in his design concepts . The best-known design programs of his comprehensive “New Age philosophy”, which have been presented with great success internationally, include: The multiple award-winning “Makis – Children’s Furniture Program”, the Warlamis art carpets and the “Waldviertel Sitting Stones” (Living Sculptures).

His most outstanding architectural works include: The project for the Hamburg Music Hall, The Church of the Joyful Tidings in Waidhofen / Thaya (2004) and the Waldviertel Art Museum with the Sculpture Park (2009) and the unique planning concept for a crypt for the Apostle Paul over the Pope emeritus Benedict XVI. to Prof. Warlamis writes:

“I find it moving that you see your work as an architect as a theological assignment…. I accompany your work in my thoughts and prayers … “

2009 the Golden Decoration of Honor for services to the federal state of Lower Austria and 2010 the Austrian Cross of Honor for Science and Art. He was an honorary member of the Russian Academy of Arts, Moscow and honorary professor of the Universitatea de Arta si Design in Cluj-Napoca, Romania Publication of approx. 50 specialist publications, catalogs and books.

Necessary Always Enabled
Necessary cookies are absolutely essential for the website to function properly. These cookies ensure the basic functions and security features of the website, in an anonymous form.
Function
Functional cookies help to carry out certain functions, such as: B. sharing the content of the website on social media platforms, collecting feedback and other third-party functions.
Performance
Performance cookies are used to understand and analyze the main performance indicators of the website, which helps to provide a better user experience for visitors.
To Analyse
Analytical cookies are used to understand how visitors interact with the website. These cookies help to get information about the number of visitors, the bounce rate, the traffic source, etc.
Advertising
Advertising cookies are used to offer relevant advertising and marketing campaigns to visitors. These cookies track visitors to different websites and collect information in order to deliver tailored advertisements.
Others
Other non-categorized cookies are those that are analyzed and have not yet been assigned to a category.
SAVE & ACCEPT

For groups, kindergardens and school classes seperate hours can be arranged.